“I just want my son back as he was, but I know that’s not possible.”

Brandon Curtis was a normal, everyday young man who was a tease to all who knew him. He would love to jump out from behind something if he thought he could scare you. He was a thoughtful young man and would listen to anyone who needed his time and was a true friend. He was a leader on the football, wrestling and track teams. But most importantly, he was a leader and great example off the field as well. Brandon always stood up for those who needed a friend and made friends with everyone. He received his Eagle Scout award just before his death. He was involved in any activity he could find that was fun to do with his friends. He loved his family and showed that by the way he treated them. He was never cocky about who he was. He always thought of himself as not popular in school and said he didn’t feel that he had enough friends. He was a great kid, living a normal life that was very active and involved. He had his priorities set right in his life. God first, family and friends second.

When Brandon was in the process of getting his driver’s license, he asked us about organ donation and what it meant. He thought about it for a few minutes and said, “If I’m dead and not using my organs, why wouldn’t you want to help someone else out and save their life? After all, you don’t need them anymore, so WHY NOT?”  After that, there wasn’t any more said. Brandon loved the medical field and his interests were getting stronger in that area. I have no doubt that Brandon was happy about his organ donation.  He got to help save six lives and benefit hundreds of others.

As a father, I’m glad that he made that decision ahead of time so we weren’t faced with making it at the hospital. I wasn’t really sure at first and had a hard time with it because I kind of felt that they were parting my son out like an old, used car. That is what I felt at the time. The donor services were wonderful and very gentle with our feelings and the whole process. As the process went forward, some time had passed, and I saw the blessings come to those who received his organs, I know it was the right decision. They can’t bring my son back but he can live on in the lives of others. I’m still not 100% over my feelings yet, but about 80%. I just want my son back as he was, but I know that’s not possible.

If I could offer some advice, not everyone can and will be donors. But what if you could save someone else’s life? As Brandon said, “If you have some good organs that can be used, WHY NOT?” Make the decision today to be an organ donor and then don’t worry about it and let life take its own course.

In August 2010, my best friend, Brandon Curtis, died in a car rollover and I was the driver of the vehicle.

It was like any other day: we had just finished our early morning football practice, we all hopped in my car and as we pulled into our school parking lot, I decided to do something stupid. I “hit the gas” and got going too fast and lost control of my vehicle. At that moment my life changed and it will never be the same.

My best friend was in critical condition and passed away the following day. You never expect something as tragic as this to happen to you, but it can, as soon as you decide to drive recklessly. It’s never something you intend to happen, but it does and you have no control over it. You will never forget the horror of the event – it stays in your mind for the rest of your life; the sirens blaring, images of your friends lying on the ground and your car totaled.

I want you to understand that things can change in less than a second. The world you thought you knew can be flipped around and tossed out the window. Please learn from my story and always drive safely. 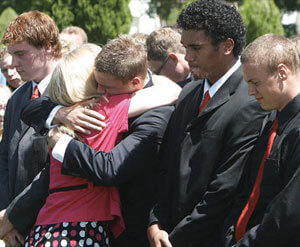